Below you can find all available features that clojure-lsp provides with examples using Emacs lsp-mode as the client.

Find a function/var declaration in the ns#

Find all references of a function, var, keyword or namespace alias#

Show all symbols on current file#

Also, it's possible to live rename symbols on the same buffer with linkedEditingRange feature. 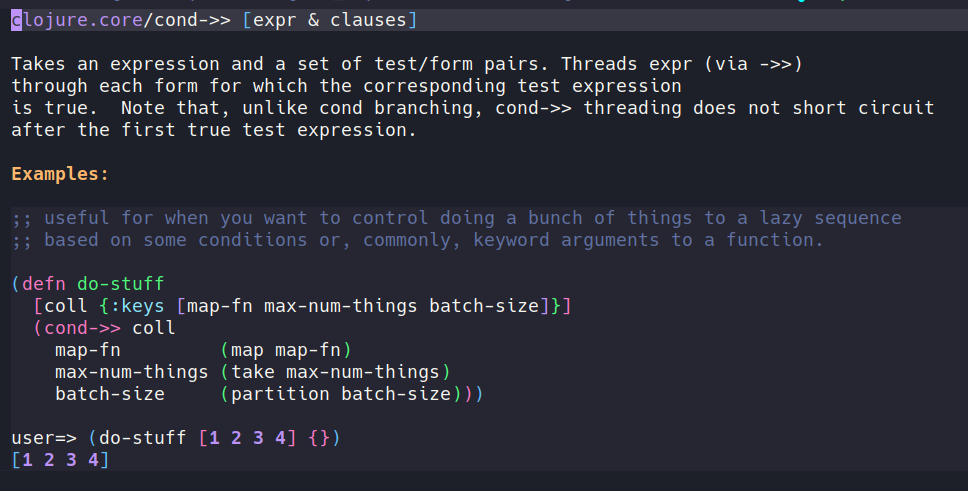 To understand what is supported and how to configure it, check the settings section.

Snippets are templates that make it easier to enter repeating code patterns, such as common functions/forms, they are available during completion. Tabstops are defined as $number with $0 as last tabstop.

See below for screenshots. 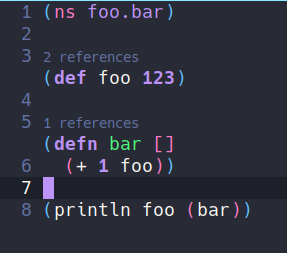 Format a whole file or range#

The LSP server is the best to say what is the semantic value of a token on the editor, semantic tokens allows server return to client all tokens of a buffer and how client show apply highlight.

Note: server return the semantic token (e.g. function) and the client/editor apply the color that matches the user's theme. 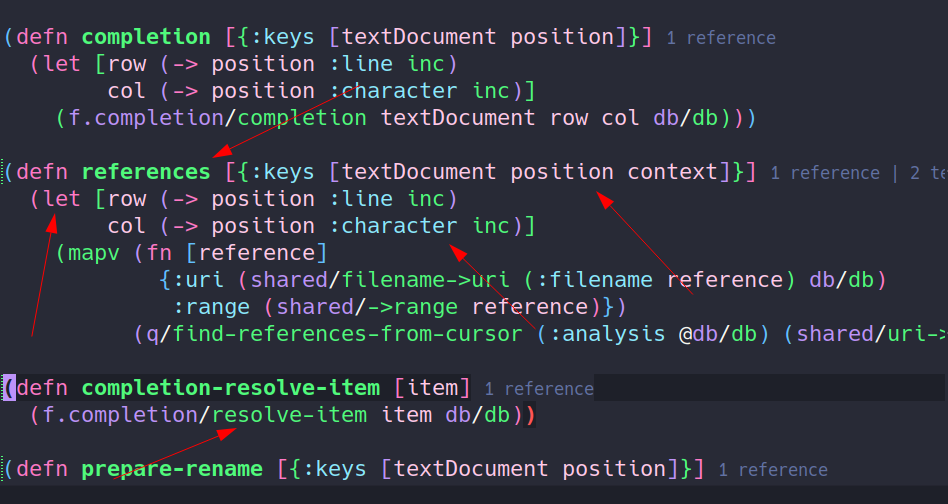 Show functions that call the current one recursively 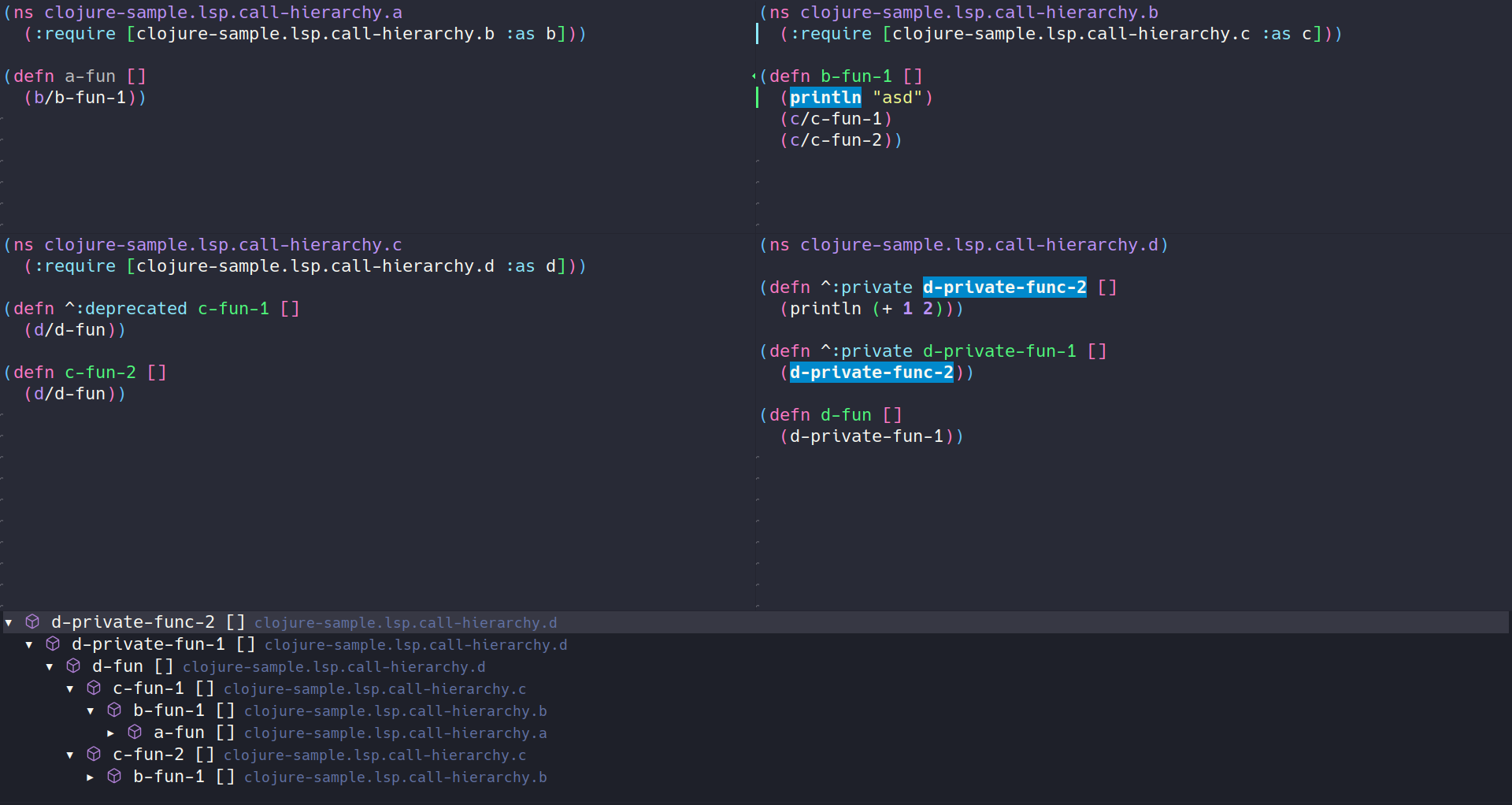 Show functions that the current one call, recursively 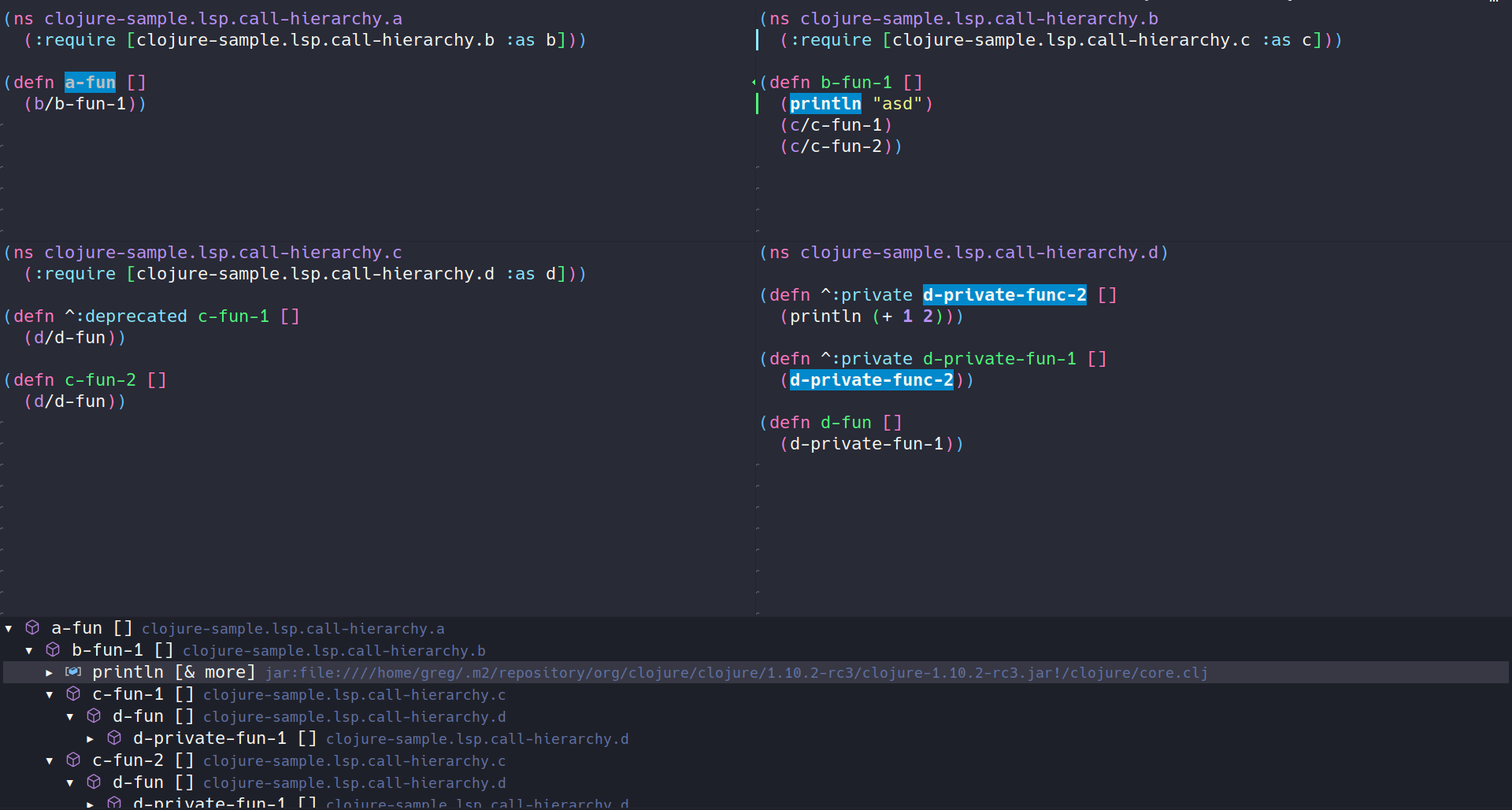 Show the tests tree hierarchy of a file 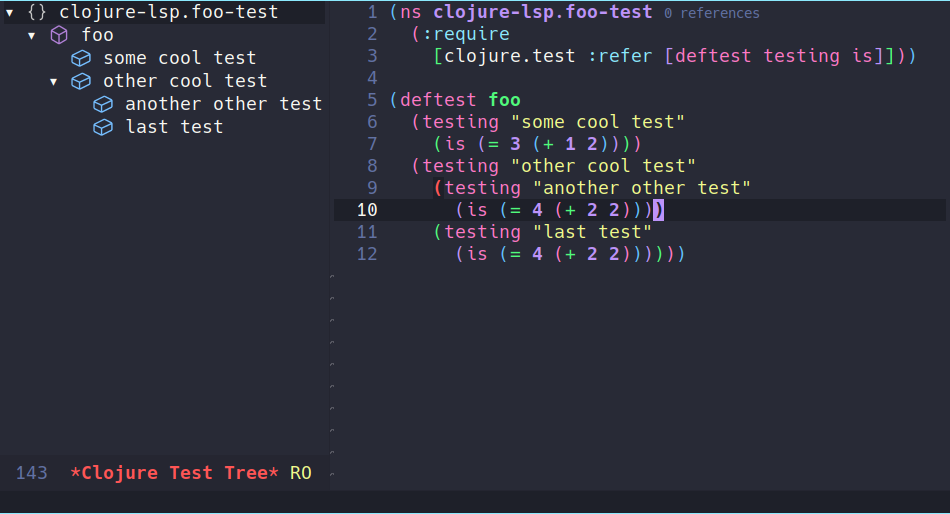 All linters besides the ones below come from clj-kondo that clojure-lsp calls under the hood to lint the code and retrieve the analysis to make most of features work.

Every linter configuration should be done on clj-kondo side, so anything related to unresolved symbols or unknown macros are probably related to wrong clj-kondo for the project. For more information on how to configure clj-kondo check here.

Below you can find the custom linters implemented on clojure-lsp side that uses the :custom-lint-fn from clj-kondo:

For more information on how to configure it, check the diagnostics settings section.

Clojure-lsp has a optional integration with clj-depend, making it easier to configure namespaces relationship.

For more information on how to configure it, check the diagnostics settings section.

It's possible to configure clojure-lsp to generate and analyze stubs for specific namespaces available on your project classpath, this is useful for closed source dependencies like datomic.api, with that clojure-lsp will be able to make most features work with those dependencies. For more information check the stubs settings section.

Commands that client can request. Most code actions use these commands as actions.

Note: Most of these are available via code actions and clients or users may choose to use the code action menu to execute them instead of mapping.

All functions in clojure-lsp have a two-letter mnemonic shortcut. E.g. tf for thread-first-all. We strongly suggest that client authors and users use these shortcuts keys when choosing to map these commands to key chords or menus; this allows for users to maintain muscle memory and familiarity as they switch between clients and editors. Thank you to clj-refactor for this system and other tools that adhere to it.

LSP clients will allow you to bind these commands to shortcuts or menu items using LSP's workspace/executeCommand and passing a map with "command" and "arguments" keys.

Return basic information about the server.

Return debug information about the element at point.